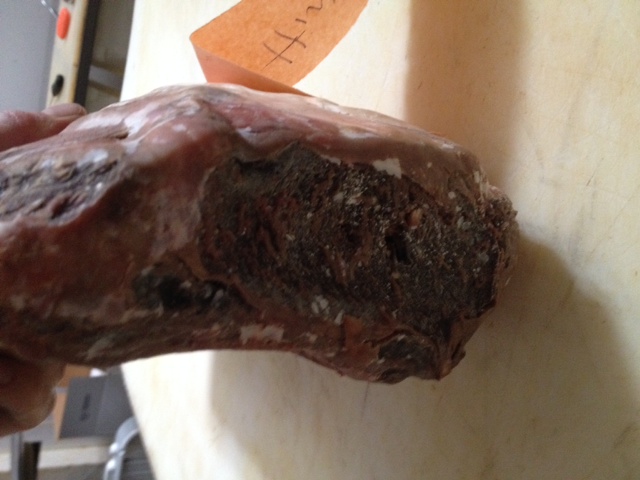 When Geoff Hewitt asked us to age a USDA Prime Rib Roast for 60 days, we were skeptical as to how it would turn out.  But, on Saturday, January 4, he picked up his meat. The image above is what it looked like.

We were skeptical as to how it would turn out.  Our assumption was that by the time we finished trimming the steaks, there would be little meat left.  Surprisingly, however, we didn’t have to trim as much as expected.  The rib almost seemed to have entered a state of  “suspended deterioration.”  Well, lets get to the point.  After cutting it into about 8 nice steaks, we gave the beef to the customer and asked him to provide a report.  Here’s what he had to say:

My outdoor gas grill unfroze and I was finally able to properly cook the first of the 60 day dry-aged steaks.  I took it out of the refrigerator this morning to allow it to get to room temperature before grilling.   I lightly Kosher salted both sides.  No trimming was necessary as your meat cutter did a fine job of removing edge fat and overly dry parts.  The steak had no smell at all, even at room temperature.  I heated the grill, all three burners on high, for twenty minutes until the thermometer read about 750F.  I grilled each side for approximately four minutes which gave me a steak with beautifully charred crusts on both sides, the grill marks being pitch black as were the edges.  As soon as I took it off the grill and walked inside, a big difference was noted – the steak smelled unlike any steak I’ve had before.  It was the exact smell I had been looking for for years; a fairly strong, almost funky aroma.  Would that hold up in the taste?  I let it rest for a few minutes while I dug into a side dish and finally cut off a small piece.  The interior was a perfect pink color top to bottom.  Just a perfectly medium rare piece of meat.  I was expecting the meat to be slightly dry due to the long drying but it was just as juicy as any steak I’ve had.  I know the roast lost four pounds in weight but I think most of that was a water loss, not a fat loss so the fat remained.  Losing all that water just concentrated the meaty umami flavor and added an earthy flavor that was better than I had hoped for.  Most steaks I’ve eaten lose quite a bit of liquid during eating and my steak often ends up in a pool of brown water/fat but that was not so with this steak.  It oozed very little moisture onto the plate since it was devoid of most of its water to begin with.  A huge plus.  That was probably the reason is developed such a beautiful char while cooking – it didn’t steam in its moisture while on the grill.  The funky taste I had hoped for was there but not to an overpowering level, just a nice additional flavor layer.  I couldn’t be happier with the outcome.

As I told you, I’ve had many 28-day dry-aged steaks but really couldn’t see any difference in those from non-aged steaks.  I think 60 days is just about perfect.  The exterior of the roast was very hard at that point, requiring some, but minimal trimming, much less than Sanford and I thought and I doubt if aging for a longer time would make much difference as the remaining moisture would be locked inside by the dry crust. I have now spoiled myself to the extent that I’ll be having this done again.  No more supermarket steaks for me!

Thanks again, Hank and Sanford.  It’s a real treat to work with folks who take food seriously.