So, I received a call this morning around 10am (Oct. 23) from a woman in New York. She quickly identified herself as the daughter of a long time customer and explained that her mother had been bringing her items from Mister Brisket for years. How, she wondered, could she get a few things herself without needing her Mom to serve as courier? I quickly explained how easy it was for us to ship to her via UPS ground and that it would take two days to arrive–still frozen. We discussed items she’d recently had and really liked–including our amazing beef pastrami and Meyer Natural Angus USDA Prime Beef Skirt Steaks. I told her the cost on these items and how much she could expect shipping to add to her total. She added on a Meyer Natural Angus USDA Prime First Cut Brisket for the slow cooker and decided that was enough for her first order.

Ok, I said–now the last thing needed is a credit card number. Susan told me to hang on and then came back to the phone. The card is in my husband’s name she explained which led me to immediately think to myself that this is information I don’t want. In truth, I need the numbers, exp. date, special code and billing address zip. Plus, the other phone was ringing and someone had walked in for an early corned beef sandwich. But, before I could tell her not to bother, she finished telling me his name–Aaron Neville. Funny, I replied, there’s a famous singer with the same name.

Yes, she told me, that’s my husband.

You mean the Aaron Neville who did those duets with Linda Ronstadt? Yes.

You mean the guy from New Orleans who has performed for years with his brothers? That I saw down at Jazz Fest around twenty years ago? 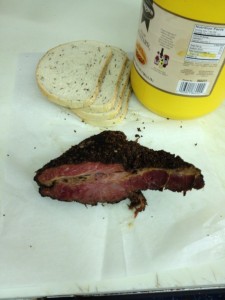 Susan patiently explained it was indeed that Aaron Neville. Then she told me that even as we were speaking, he was sitting across from her eating Mister Brisket Pastrami with scrambled eggs.

Susan, I told her, snap a picture of your husband eating my pastrami and I’ll pay the shipping costs on your order. She didn’t respond to that particular request but just said “hold on.”

Next, there was a man’s voice on the other end. Had he spoken in falsetto, it would have sounded familiar. But it was just a guy telling me that he really liked my pastrami and skirt steaks. I thanked him and, and….I really don’t know what else I said. I was conscious of trying not to talk too much. I did mention that I’d seen him perform. And then I just said thank you and he handed the phone back to his wife.

And then Aaron Neville, a 3 time Grammy Award winner, presumably returned to eating his pastrami and scrambled eggs.

I finalized Susan’s order. Then I went to the counter and made a corned beef sandwich for a customer.